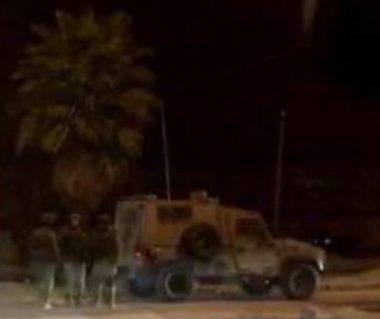 Israeli soldiers abducted, on Tuesday at dawn, three Palestinians, including two children, in the southern West Bank district of Hebron, and two young men in Tubas, in the northeastern part of the occupied West Bank.

The Hebron office of the Palestinian Prisoners’ Society (PPS) said the soldiers invaded and searched homes in the city, and abducted Abdul-Rahman Omran al-Atrash 28.

Furthermore, the soldiers installed roadblocks on roads leading to Sa’ir, Halhoul, Hebron’s northern road in Jouret Bahlas area, and several other places, before stopping and searching dozens of cars, and interrogated many Palestinians while inspecting their ID cards.

Also Tuesday, the soldiers and police abducted six more guards of the Al-Aqsa Mosque, from their homes, after invading and violently searching them, in the city, just one day after abducted four guards.