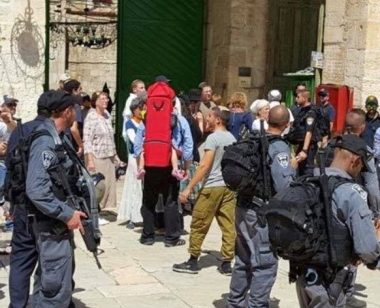 Just one day after the Israeli army abducted four civilian guards of the Al-Aqsa Mosque, in occupied East Jerusalem, the soldiers and police abducted, earlier Tuesday, six more guards, from their homes, after invading and violently searching them, in the city.

The abducted guards were cuffed and blindfolded, before the soldiers moved them to several detention and interrogation centers in occupied Jerusalem.

On Monday, the soldiers abducted four guards, identified as Salman Abu Mayyala, Luay Abu Sa’ad, Hamza Nimir and Arafat Najeeb. They all remain detained, awaiting a hearing at the District Court in Jerusalem.

The latest abductions of the guards have been carried out after Israeli personnel of the Archology Department invaded the mosque and tried to confiscate some of its historic stones, while many police officers invaded the Al-Marwani mosque in the Muslim holy compound.

During the invasion, the soldiers assaulted many Palestinians, including the head of the Al-Aqsa Mosque, Sheikh Omar al-Kiswani.