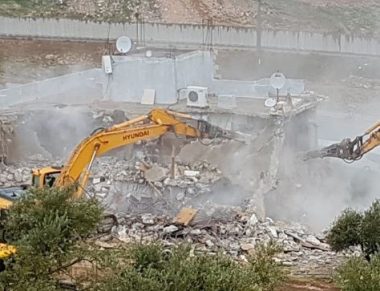 Israeli soldiers demolished, on Tuesday at dawn, two Palestinian homes, without a prior warning, in the al-‘Isawiyya town, in occupied Jerusalem, reportedly for being built without construction permits.

Several Israeli police and military vehicles, accompanied by bulldozers, invaded the town, before the soldiers demolished a home, belonging to Ahmad Abu al-Hummus and his family.

The 150 square/meter home was recently construction, and the family was preparing to move into it after concluding all needed work.

The soldiers also demolished an under-construction home, belonging to members of Mheisin family, in al-‘Isawiyya.

Mohammad Abu al-Hummus, a member of the Follow-Up Committee in the town, said the family built the property one year ago, but stopped the construction of the second floor, under a direct order from the City Council.

Since then, the family has been preparing and filing all needed applications, but the army went ahead and demolished the building without a prior warning.