Israeli Soldiers Abduct Five Palestinians In Hebron, One In Tubas 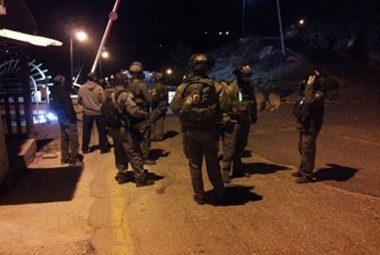 Israeli soldiers abducted, on Wednesday at dawn, five Palestinians from several parts of the southern West Bank governorate of Hebron, and one in Tubas, in northeastern West Bank.

Media sources in Hebron said the soldiers searched homes in the al-‘Arroub refugee camp, north of the city, and abducted Bashar Ya’coub al-Ja’bari.

Another Palestinian, identified as Hotheifa Mohammad Zohour, was abducted from his home in Beit Kahil town, west of Hebron.

In related news, the soldiers invaded Beit Ummar town, before breaking into the home of Ja’far Awad, and summoned him for interrogation in Etzion military base and security center, north of Hebron.