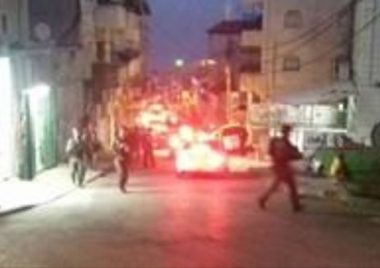 Mohammad Abu al-Hummus, a member of the Follow-Up Committee in al-‘Isawiyya, said dozens of soldiers and security officers invaded homes and searched them.

The soldiers also invaded Shu’fat refugee camp, clashed with dozens of youngsters, for several hours, and abducted Mohammad Abu Taleb, after breaking into his home and searching it.

The soldiers also fired many gas bombs at homes and stores, causing several Palestinians to suffer the effects of teargas inhalation.

Also at dawn, the soldiers abducted seven Palestinians in Hebron and Qalqilia governorates, searched many homes and confiscated a large amount of cash from one home, in addition to shutting down a blacksmith’s workshop, and confiscating lathe machines and equipment.