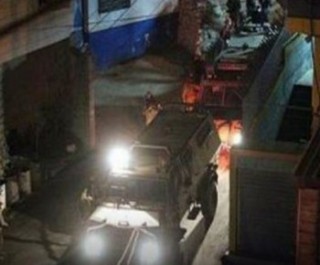 Israeli soldiers abducted, on Wednesday at dawn, seven Palestinians in Hebron and Qalqilia governorates, searched many homes and confiscated a large amount of cash from one home, in addition to shutting down a blacksmith’s workshop, and confiscating lathe machines and equipment.

Media sources in Hebron, in the southern part of the West Bank, has reported that the soldiers abducted Ahmad Bassam Ja’bari, 24, after invading his home and ransacking it.

They added that the soldiers also abducted Monjed Mousa Juneidi, and Mohammad Maher Obeid, and confiscated a car, owned by Arafat Jamjoum.

The soldiers also invaded many homes and a bakery, before violently searching them. Owners of two of the invaded homes have been identified as Nihad al-Ja’ba, Omar Maher Obeid and Sa’ad al-Qawasmi.

The soldiers confiscated Sa’ad’s car, and more than 16000 shekels, after interrogating him and his family.

The soldiers also abducted Mohammad Mousa Rajab, from Hebron, while he was crossing the al-Kamara border terminal between Jordan and the West Bank, on his way back home after performing pilgrimage in Mecca.

In ‘Arraba town, south of Jenin, in northern West Bank, the soldiers invaded a blacksmith’s workshop, searched it and shut it down, in addition to breaking into three lathe workshops and confiscating their machines.