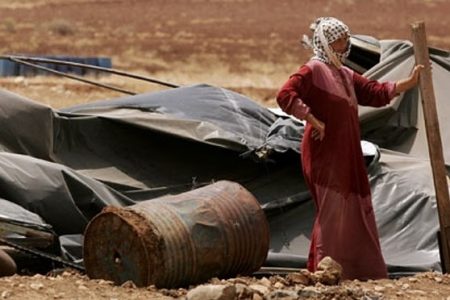 Israeli rights group B’Tselem slammed the Israeli government’s plans to forcibly expel two Palestinian communities in the occupied West Bank, in a letter to Israeli Prime Minister Benjamin Netanyahu saying that such a move would constitute a “war crime.”

The letter, made public on Monday, describes in detail how the expulsions would constitute a violation of international law.  According to Ma’an News Agency, B’tselem strongly noted that the evacuation of the Susiya and Khan al-Ahmar villages would “constitute a war crime carried out at your instruction and under your personal responsibility.”

He added that the expulsions would occur “within a few months.”

The villages are considered “illegal” by the Israeli state, and have been embroiled in legal battles with the Israeli state for years. Both villages are located in Area C — the more than 60 percent of the West Bank under full Israeli military control, where Israel refuses to permit Palestinian construction. Rights groups have pointed out that this policy lines up with Israel’s goals of expanding Israeli settlements throughout Area C, while depopulating Palestinian villages there.

B’Tselem noted that Israeli policies have forced Palestinians to “subsist on minimal means,” and “denies them any possibility of developing their communities to suit their current and future needs.”

“In the absence of any other option, residents are forced to build without receiving permits from the authorities, subsequently living in constant uncertainty and fear of demolition,” the group added.

In the case of Susiya, many of the village’s 200 residents have ties to the land that predate the creation of the state of Israel, and Ottoman-era land documents to prove it. However, the village lies between an Israeli settlement and Israel-controlled archaeological site, making them a target for Israeli demolitions.

Meanwhile, Khan al-Ahmar, like other Bedouin communities in the region, is under threat of relocation by Israel for being located in the contentious “E1 corridor” set up by the Israeli government to link annexed East Jerusalem with Maale Adumim.

Citing legal precedent made by the International Criminal Tribunal for the former Yugoslavia (ICTY), B’Tselem said that Israel’s potential demolition of entire Palestinian communities — which would mark the first time such an extreme demolition was carried out in 50 years — would line up with the the court’s definition of forcible transfers.

“While the official Israeli guise for demolishing these Palestinian communities is ‘buildingwithout the necessary permits’, Israel’s permit and planning policy in the West Bank renders this claim disingenuous, to say the least, and cannot be accepted,” B’Tselem said.

On top of violating past rulings made by the International Criminal Court (ICC), B’Tselem also cited the Fourth Geneva Convention, which prohibits the forcible transfer of “protected persons” in or outside occupied territory.

“We call on you to refrain from the human rights violations that will result from demolishing these communities. We caution, yet again, that these actions would constitute a war crime committed at your instruction and under your responsibility, and for which you would bear personal liability,” the group concluded.