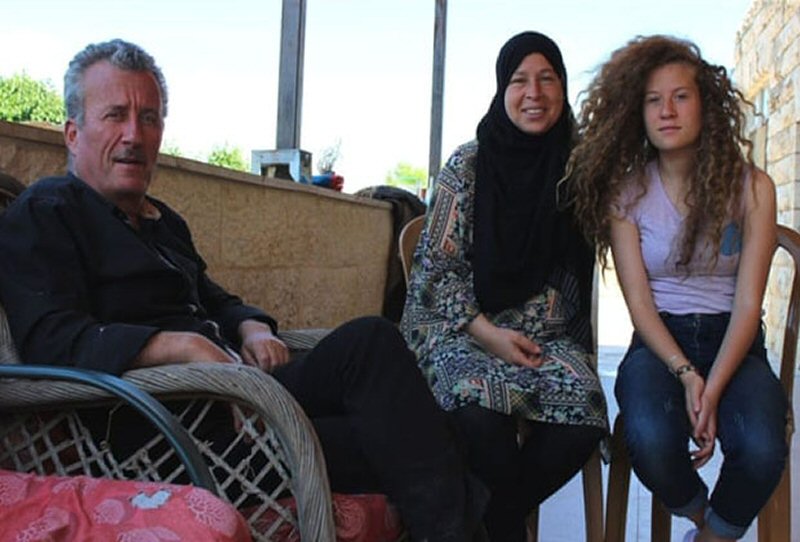 Days of Palestine/Al Jazeera – The writer speaks to one of the heroines of the Palestinian popular resistance in the West Bank village of Nabi Saleh.

Ahed Tamimi was just 14 when she rose to international prominence through the release of a video and a series of photos capturing her desperate attempts to save her 11-year-old brother, Mohammad, from the grips of an Israeli soldier in 2015.

“Many Israelis threatened me on social media after the video was released, demanding that I be detained or even killed,” 16-year-old Ahed told Al Jazeera from her family’s home in the village of Nabi Saleh, where the distinct, red-tiled roofs of illegal Israeli settlement housing dot the adjacent hilltop. “The harassment handcuffed my life. I was scared to even go outside or visit my friends.”

In the video, filmed during one of the weekly protests that had been staged in Nabi Saleh for years, Ahed is seen hitting and biting the hand of the masked soldier as her mother and aunt hit and tug at his clothes, struggling to pull the soldier away from Mohammad.

Afterwards, scores of journalists rushed to the village to interview Ahed, with NBC News describing the blond-haired, blue-eyed teenager as the “poster child” for the Palestinian struggle.

“The media helped us, because my voice and our message were spread throughout the world,” Ahed said, still exuding the confidence that has made her a leader at Nabi Saleh’s protests, which she began attending at the age of nine.

However, while her newfound fame cast a spotlight on the village’s violent experiences with the Israeli occupation, it also made Ahed an easily recognisable figure among Israeli forces stationed in the West Bank.

The harassment began immediately following the video’s release, as Israelis called her a “terrorist” on social media and threatened to kill her, the family says. Bassem, Ahed’s father and a long-standing leader in the village, said that her 19-year-old brother, Waed, was detained after the release of the video. At the start of his 10-month stay in Israeli jail, Ahed’s mother, Nariman, received permission to enter Israel to visit him, and Ahed tagged along.

“When we passed a checkpoint near Jerusalem, the Israeli soldiers got on the bus and immediately singled her out,” Nariman told Al Jazeera. “While everyone else was permitted to pass, Ahed was pulled off the bus and told she wouldn’t be allowed into Israel.”

During the village’s protests, Israeli forces would often scream Ahed’s name and shout curses at her. “Look! It’s Ahed Tamimi. Shoot her!” Bassem recalled one soldier as saying.

The family was often scared for their daughter, he added: “Whenever the soldiers recognise her, they do something to make her life difficult. Every time she left the house, we were scared something would happen to her.” Ahed was even forced to stay at her cousin’s home in Ramallah, where she attends school, to avoid the danger of passing through Israeli checkpoints on her way from Nabi Saleh.

The Tamimi family is no stranger to Israeli persecution. In 2012, Amnesty International labelled Bassem a prisoner of conscience during one of his numerous stays in Israeli prison. Nariman has been detained five times by Israeli forces, and Waed twice, for their involvement in protests.

In 2010, just a few months after the weekly protests began, Israeli authorities issued a demolition order on the family’s home, which Bassem believes was intended to pressure them to cease their involvement in the protest movement. Their home has since been raided more than 150 times by Israeli forces, he said.

The 600 or so residents of the village receive only 12 hours of running water a week from Israel, while the settlers in Halamish have running water 24 hours a day. A large swimming pool can also be seen on the settlement grounds from the Tamimi family’s home.

The village is raided almost every day by Israeli forces, who douse residents’ homes with skunk spray, a putrid-smelling liquid. The Israeli army targets the water tanks installed on their roofs, Bassem said.

The vast majority of the lands in Nabi Saleh are in Area C, which is under full Israeli military control, and Palestinian construction is restricted. As a result, at least 13 homes in the village have pending Israeli demolition orders, which can be enforced at any moment.

“It’s a silent ethnic cleansing,” Bassem said, adding that the protest movement was targeting not just the Halamish settlement, but the Israeli occupation in a broader sense.

“Imagine someone controlling every decision in your life,” Nariman said. “It’s like being locked in a room with no oxygen. It’s not just about the checkpoints. As long as the occupation exists, we can’t be free.”

Since the start of the protests, Israeli forces have killed three Palestinians and injured hundreds, some of whom have become permanently disabled. Meanwhile, scores of Palestinians have been jailed, forcing residents to pay thousands of dollars in bail and Israeli fines.

As a result of these pressures, the village recently discontinued its weekly marches.

“It’s hard for any person to carry on like this. We can’t continue going to the demonstrations each week, waiting until someone gets injured, and then running back to our homes,” Bassem said.

In lieu of the weekly protests, Nabi Saleh residents are now employing a more sporadic strategy, holding protests at random times to surprise the soldiers and move away from the predictability of their weekly routine.

The village is also focusing on building up a “culture of resistance” among other communities.

“The occupation limits our dreams,” Ahed said, pushing her curly hair out of her eyes. “Our thoughts are caged by the occupation. The Israelis first control our dreams, and then they break them.”