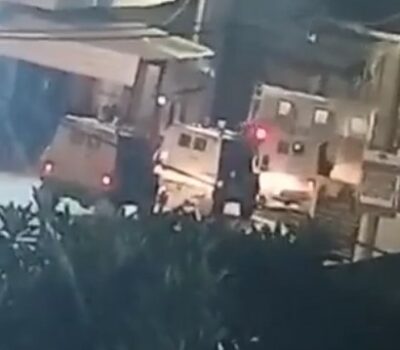 In Nablus, undercover Israeli soldiers infiltrated Jamma’in town, south of the city, and surrounded a home before Israeli military vehicles isolated and invaded the area and used loudspeakers on their jeeps, demanding two Palestinian siblings to leave their home.

Media sources said the soldiers abducted Abdullah Mohammad Abdullah and his brother Orwa, after being forced to leave their home and confiscated their car. The army threatened to demolish the property if they did not leave it.

The soldiers also surrounded the home of Montaser Sal’ous before they stormed and ransacked it and abducted the young man.

During the invasion, the soldiers broke into several shops and violently searched them before confiscating surveillance recordings and equipment, leading to protests.

The soldiers also invaded the home of a political prisoner, Wisam Turkman, in Qabatia, and searched it while interrogating the family.