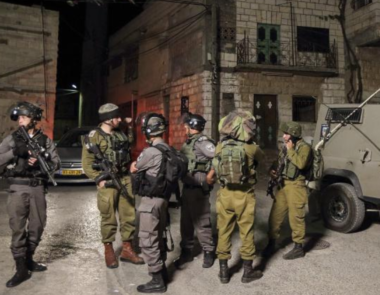 Israeli soldiers abducted, on Monday at dawn, at least five Palestinians from Ramallah, Bethlehem and Jenin governorates, in the occupied West Bank, the Palestinian Prisoners’ Society (PPS) has reported.

The PPS office in Ramallah, in central West Bank, said the soldiers invaded the al-Jalazonerefugee camp, before breaking into and ransacking many homes, and abducted Mohammad Sami Nakhla, 21, and Mohammad Eyad Dweik, 18.

It added that the soldiers assaulted and injured Mohammad al-Masri, the father of two detainees, identified as Shafiq and Khaled, after storming and ransacking his home in the refugee camp.

In Bethlehem, the soldiers invaded the al-Khader town, south of the city, and abducted Moath Ahmad Mousa, 19, and Tha’er Saber Taqatqa, 22, after invading and searching their homes.

In Jenin, in northern West Bank, the soldiers abducted Yousef Emad Turkman, from Jenin refugee camp, after stopping him at a military roadblock, near Arraba town, south of Jenin.

In addition, the soldiers invaded Qalqilia city, stormed and ransacked the home of a political prisoner, identified as Raed Ahmad al-Hotari, before illegally confiscating his wife’s car in addition to 2000 Shekels.

It is worth mentioning that al-Hotari, 47, was taken prisoner on March 23rd, 2003, and was sentenced to life in prison.

In related news, the soldiers invaded Tayasir village, east of Tubas in northeastern West Bank, and ordered a Palestinian, identified as Mohammad Yousef Dibik, to halt the construction of a small water reservoir on his own property.