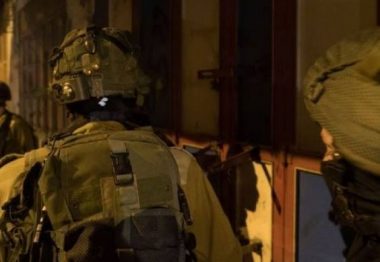 Israeli soldiers abducted, on Friday at dawn, four Palestinians in different parts of the occupied West Bank, and one who was taken prisoner at a military roadblock, on Thursday at night.

The Nablus office of the Palestinian Prisoners’ Society (PPS), in northern West Bank, said the soldiers invaded and searched homes in Balata refugee camp, east of the city, and abducted Mohammad Ghassan Hashash.

It added that the soldiers also invaded homes in Balata town, and abducted a former political prisoner, identified as Salah ‘Isawi.

On Thursday at night, the soldiers abducted a young man, identified as Ashraf Mohammad Amro, from Jenin refugee camp, in the northern West Bank city of Jenin, after stopping him at a military roadblock near Ramallah, in central West Bank.

Eyewitnesses said the soldiers installed a sudden military roadblock, searched many cars, and abducted Amro, while he was heading to his work, in addition to confiscating his car.