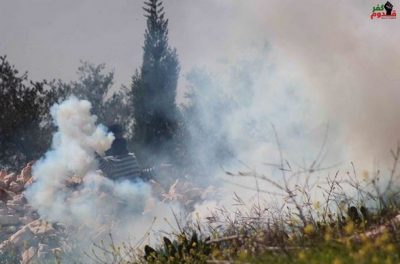 Morad Eshteiwi, the media coordinator of the Popular Committee against the Annexation Wall and Colonies in Kufur Qaddoum, said dozens of locals, accompanied by Israeli and international peace activists, marched from the center of the town, heading towards their lands near the illegal Kedumim colony.

He added that the army fired many gas bombs, concussion grenades and rubber-coated steel bullets at the protesters, before chasing some of them, while several local youngsters hurled stones at the soldiers.

Many protesters suffered the severe effects of teargas inhalation, and received the needed treatment by Palestinian medics, who also moved some of them to the local clinic.

The popular weekly processions in Kufur Qaddoum started fifteen years ago after the military blockaded the town’s main road to enable east access for colonizers, driving to and from Kedumim illegal colony, built on private Palestinian lands.

The protest also comes as part of ongoing processions across the West Bank and the Gaza Strip, denouncing the illegal U.S. recognition of occupied Jerusalem as the unified capital of Israel, which was declared by Donald Trump in early December of last year.

In related news, the Palestinian Health Ministry has reported, Friday, that Israeli soldiers shot at least eleven Palestinians after the army, stationed across the border fence, attacked dozens of protesters in several parts of the besieged Gaza Strip.