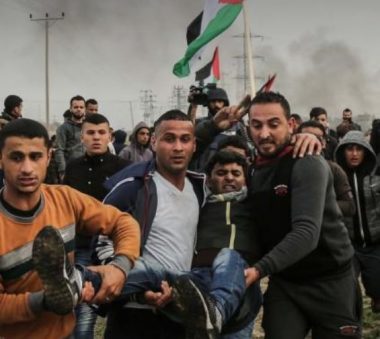 Update: The Palestinian Health Ministry has reported that Israeli soldiers injured, Friday, fifteen young men protesting on Palestinian lands near the border fence in the northern and eastern parts of the Gaza Strip, and in central Gaza.

It said that the soldiers, stationed on military towers and tanks around Nahal Oz base, across the border fence east of Gaza city, fired dozens of live rounds at the protesters, wounding a young man in his leg, before he was rushed to the Shifa medical center, suffering moderate wounds.

Many Palestinians also suffered the severe effects of teargas inhalation and received the needed treatment by local medics.

The soldiers also attacked protesters near the border fence east of Jabalia town, in northern Gaza, and moderately shot four with live fire, before they were rushed to the Indonesian hospital, in nearby Beit Lahia city, while many others suffered the effects if teargas inhalation.

In Khan Younis, in southern Gaza, the soldiers shot seven Palestinians with live fire, before they were rushed to Nasser and the European Hospitals, while many residents suffered the effects of teargas inhalation.

In addition, the army shot a young man with a live fire in the leg, near Beit Hanoun (Erez) terminal in northern Gaza, causing a moderate injury.

The Palestinian Health Ministry has reported, Friday, that Israeli soldiers shot at least eleven Palestinians after the army, stationed across the border fence, attacked dozens of protesters in several parts of the besieged Gaza Strip.

Dr. Ashraf al-Qedra, the spokesperson of the Health Ministry, said the soldiers shot a Palestinian with a live round in the leg, and another in his shoulder, in Beit Hanoun, in northern Gaza.

He added that the soldiers also shot another Palestinian near Karni (Nahal Oz) crossing, east the Sheja’eyya neighborhood, in Gaza city.

Furthermore, the soldiers shot one Palestinian in both legs, east of the al-Boreij refugee camp, in central Gaza.

Three other Palestinians were also shot with live fire, east of Khan Younis, in the southern part of the coastal region.

The soldiers also fired a barrage of gas bombs at protesters in the al-Farahin area, and Abasan as-Sagheera, east of Khan Younis.

It is worth mentioning that protests were also held across the West Bank for the thirteenth consecutive week, since the American President Donald Trump recognized Jerusalem as a unified capital of Israel in direct violation of International Law and numerous United Nations resolutions.