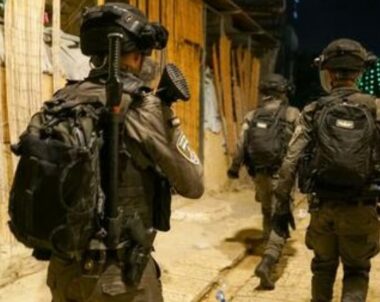 On Friday dawn, Israeli soldiers abducted five Palestinians from their homes in several parts of the occupied West Bank.

In Bethlehem, south of occupied Jerusalem, the soldiers invaded Tuqu town, southeast of the city, searched homes, and abducted Mohammad Salim Al-Badan, 31, and his brother Fadi, 33.

Mohammad is the secretary of the Fateh movement in the town; during the violent search of his home and the home of Hazem Mohammad Nuwwara, the soldiers confiscated thousands of Shekels.

The soldiers also invaded and ransacked the homes of Thieb Al-Amour, Mohammad Ali Al-Amour, Talal Al-Amour, and Yasser Suleiman, the father of Rayyan Suleiman, 7, who died from a heart attack, on September 29, after Israeli soldiers chased the terrified child to his home, accusing him and his brother of throwing stones at them. 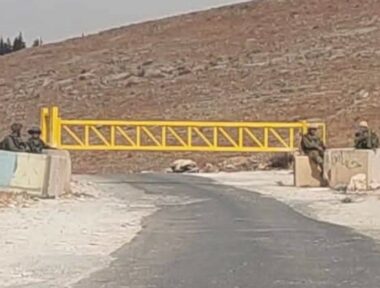 Media sources said the soldiers also closed the Iron Gate installed at the entrance of Tuqu’ town before dozens of soldiers invaded Khirbat ad-Deir and the main street in the town to secure a provocative procession by illegal Israeli colonizers who are planning to march there.

In the southern part of the West Bank in Hebron, the soldiers invaded the city’s southern area, searched homes, and abducted Mohammad Hasan Ajlouni.

In Nablus, in the northern West Bank, the soldiers invaded the Sama Nablus area in Northern Mountain in the city, searched homes, and abducted a young man, Emadeddin Bassam Isleem.

On Thursday night, several fanatic illegal Israeli colonizers invaded the area around Nabi Younes Mosque in Halhoul city, north of Hebron city, and prevented the Palestinians from reaching it. The attack came just hours after the soldiers invaded the area and closed all roads leading to the holy site.