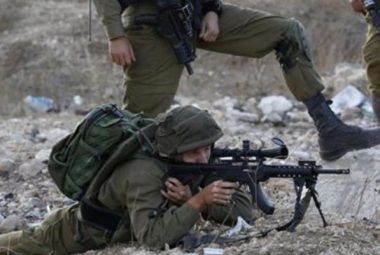 Several armored military jeeps invaded the towns, before the soldiers stormed and ransacked many homes, causing damage, and abducted five young men, including Ahmad Mohammad Taqatqa, who was shot by army fire, a few days ago, near Um Salmouna village, south of Bethlehem.

The Palestinian Red Crescent Society in Bethlehem said the soldiers also shot five young men with the illegal “Toto” expanding bullets, after dozens of residents protested the invasions into their town and homes, and the abduction of the five residents.

It added that the soldiers shot the five young men with Toto bullets in their lower extremities, causing moderate-but-stable injuries.

They were all rushed to Palestinian hospitals in Hebron, in the southern part of the West Bank.