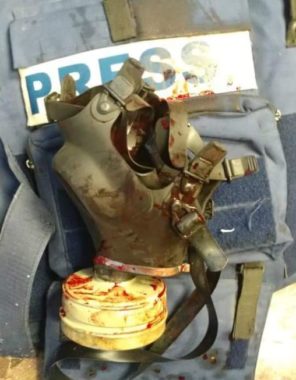 Israeli soldiers abducted, on Thursday at dawn, five Palestinians from Qalandia refugee camp, north of occupied East Jerusalem, in addition to Qalqilia and Nablus, in northern West Bank, shot two journalists, and injured one Palestinian after ramming him with their jeep.

Media sources said dozens of soldiers invaded Qalandia refugee camp, before storming and ransacking many homes, and occupied the rooftops of several buildings.

They added that the soldiers abducted Mos’ab Hasan Sajdiyya, and his brother Ahmad, from their homes in the refugee camp.

Furthermore, the soldiers abducted Qais Hamadna and Amir Hamadna, from their homes in Asira al-Qibliyya town, north of Nablus.

In related news, an Israeli military vehicle rammed a young Palestinian man, during protests against an invasion into Nablus, before he was rushed to Rafidia hospital.

During the invasion, the soldiers shot two journalists, identified as Mahmoud Fawzi and Omar Esteitiyya, after directly targeting them while documenting the invasion.

On Wednesday at night, many Palestinians, including two journalists, during protests that took place in the northern West Bank city of Nablus.

Updated From:
Israeli soldiers injured, on Wednesday at night, many Palestinians, including two journalists, during protests that took place in the northern West Bank city of Nablus.

The invasion was carried out by several armored military jeeps, and bulldozers.

Many Palestinians hurled stones, and Molotov cocktails, at an armored military bulldozer, while the soldiers fired many live rounds, rubber-coated steel bullets and gas bombs.

Among the wounded are two journalists, identified as Mohammad Fawzi and Omar Esteitiyya.
Palestinians believe that Joseph’s Tomb is the funerary monument to Sheikh Yusef Dweikat, a local religious figure. Others believe that the tomb belongs to the Biblical patriarch Joseph, revered by Jews, Samaritans, Christians and Muslims alike.