Gaza Farmers Have Dates, But Nowhere to Sell Them 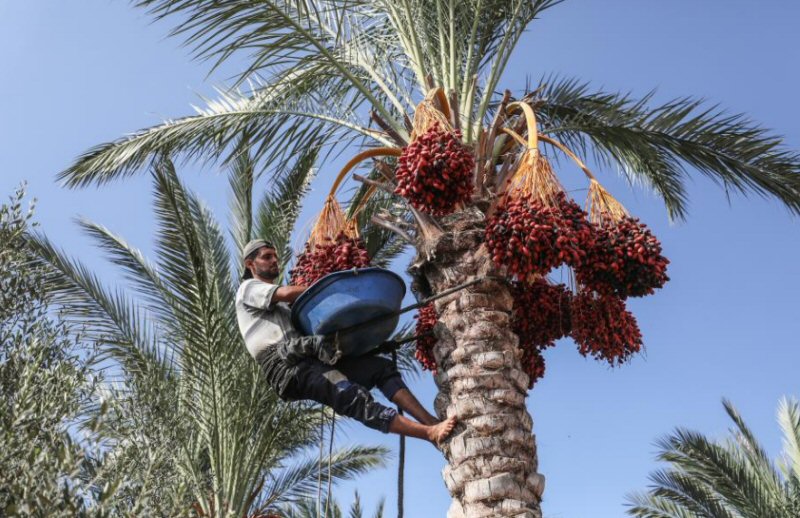 Farmers in the besieged Gaza Strip have harvested 12,000 tons of dates from their palm trees; however, they are struggling to find buyers for their produce.

High unemployment and rising poverty rates mean that locals in the Strip are unable to buy the fruit, while the Israeli siege has limited the farmers’ abilities to export their crop.

Farmer Mohammed Barka, 28, told Anadolu Agency that his yield is abundant and good this year, but the deteriorating economic condition in Gaza has caused people to buy less.

“Despite the low prices of the product, the demand is still low,” he explained. Baraka, who has been working in this profession for ten years, called on the Ministry of Agriculture to work to export the produce out of Gaza.

In a report published yesterday the World Bank warned that the enclave is “collapsing”, due to the 11-year Israeli-led blockade, and described the economy as being in “free fall”, with aid flows no longer enough to stimulate growth.

“The result is an alarming situation with every second person living in poverty and the unemployment rate for its overwhelmingly young population at over 70 per cent,” it added.

“The production of dates amounted this year to 12,000 tonnes,” said Tahsin Al-Sakka, director general of marketing and coordination at the Palestinian Ministry of Agriculture in Gaza.

“This quantity is enough for the Strip’s needs and exports also, but poor purchasing [power of the local population] leaves them stacked up in the market.” A week ago, farmers exported 12 tonnes of dates to the West Bank, Al-Sakka said.

“We hope that we will be able to export significant quantities of dates outside the Strip.”