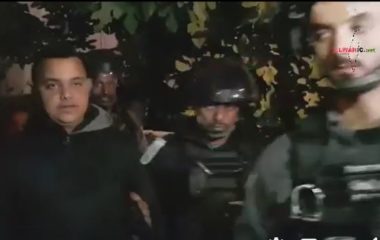 Silwanic said the soldiers abducted Ahmad Khalil Kleib, 12, and his brother, Mohammad, 16, after storming and ransacking their home in the al-‘Isawiya town in Jerusalem.

It added that the soldiers also abducted Mustafa Eyad Ghazala, 16, and his brother Mos’ab, 15, after invading and ransacking their home.

In addition, the District Court in Jerusalem ordered Mo’men al-‘Abbassi, Ala’ Mohammad al-‘Abbassi, Hatem Jaber al-‘Abbassi, Mustafa Mahmoud al-‘Abbassi, and No’man Wazouz, under further interrogation until this coming Thursday, and informed the prosecutor’s office to go ahead and indict them.

The Palestinians were among dozens of residents who were abducted by the army from their homes, in occupied Jerusalem, last week.