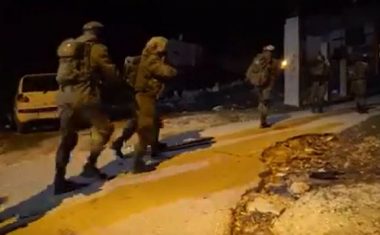 Israeli soldiers abducted, on Sunday at dawn, four young Palestinian men from Beit Fajjar town, south of the West Bank city of Bethlehem, and breaking into their homes and searching them.

Local sources said the soldiers searched the homes of the abducted Palestinians for more than three hours, and interrogated them and their families.

The Israeli army published a video, recorded by a surveillance camera on Friday at night, showing three Palestinians rushing out of a car, before throwing Molotov cocktails at Migdal Oz colony, built on Palestinian lands near Beit Fajjar, before driving away.

The army claimed that two of the abducted Palestinians are involved in the attack, and that the car they used has also been confiscated; all were moved to an interrogation facility.

It is worth mentioning that Beit Fajjar has been subject to ongoing invasions, including violent searches of homes, since the beginning of this year, leading to the abduction of more than fifty Palestinians, including children.