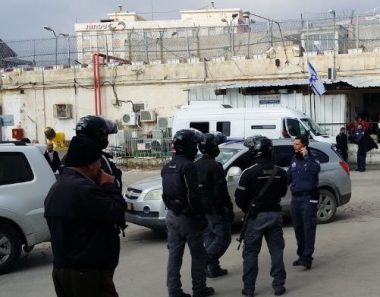 The Wadi Hilweh Information Center in Silwan (Silwanic) has reported that Israeli soldiers installed a roadblock in Ras al-‘Amoud, stopped before searching many Palestinians, and cars, and interrogated many locals while inspecting their ID cards, before abducting one woman, while another woman was taken prisoner from her home.

Silwanic added that the soldiers searched a few homes, and abducted a woman from a home belonging to members of Abu local family.

Another woman was abducted at the military roadblock in Ras al-‘Amoud, and was moved to an interrogation center in Jerusalem.

In related news, the District Court in occupied Jerusalem decided to release three young men, identified as Samir Dirbas, Mansour Mahmoud and Ahmad Ateyya, all from the al-‘Isawiyya town in Jerusalem, after ordering them to pay a third-party bail in the amount of 10.000 Shekels, in addition to denying them entry to their town for one week.

All were abducted and detained by the soldiers during various invasions, and searched of homes and cars, in differed areas in Silwan.

Late on Sunday night, more than 300 soldiers invaded al-‘Isawiyya village in Jerusalem, after completely surrounding it, and were deployed in its neighborhood and alleys.