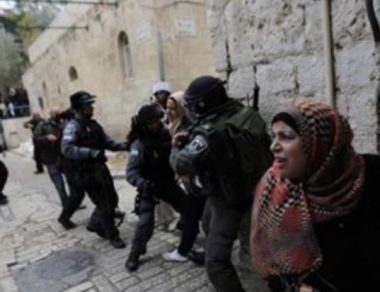 Israeli soldiers abducted, on Monday at dawn, four Palestinians, including a child and a young woman, from several parts of occupied Jerusalem, after invading and violently searching their homes.

It is worth mentioning that Ayyoub works as a guard at the Al-Aqsa Mosque, and was abducted after the searching violently searched his home.

In addition, the soldiers abducted Siraj Kashour, 23, from Abu Dis town, southeast of Jerusalem, after violently searching his home.

I related news, the soldiers abducted a young woman, who remained unidentified at the time of this report, from Shu’fat refugee camp, in the center of Jerusalem.

It is worth mentioning that the soldiers searched many homes in Silwan, Abu Dis, Shu’fat, and many other communities in occupied Jerusalem, in addition to breaking into a Restaurant in al-Misrara neighborhood.