Israeli Soldiers Abduct Four Palestinians, Including A Mother, In Hebron 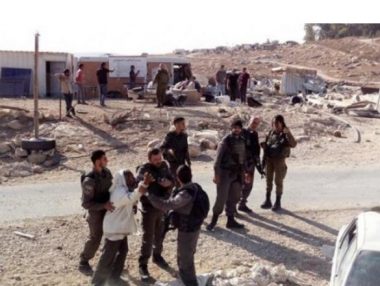 Israeli soldiers abducted, on Tuesday evening, four Palestinians; one of them is a mother of five, including two toddlers, after a group of illegal Israeli colonists invaded Palestinian lands, east of Yatta town, south of the southern West Bank city of Hebron, and assaulted many Palestinians.

Rateb Jabour, the media coordinator of the Popular Committee against the Annexation Wall and Colonies in southern Hebron, said the colonists came from the illegal Beit Yair and Mitzpe Yair outposts, which were illegally installed on private Palestinian lands.

Jabour added that the assailants then attacked, with clubs and batons, many Palestinians in Khirbit Um Hmeita area, while the residents were harvesting their lands, causing many to suffer various cuts and bruises, while the soldiers also attacked them with rifle buts and batons.

Instead of removing the colonists from the Palestinian lands, the soldiers abducted Hanan Mousa Hreizat, 37 years of age and a mother of five children, including two infants, in addition to Karam Ali Hreizat, 20, Saleh Ahmad Hreizat, 18, and Ali Mahmoud Hreizat, 20. The soldiers also detained another woman, identified as Aziza Salem Hreizat, 45, in addition to Emad Rashid, a guardian of a local school, for several hours, for filming the colonists who assaulted the Palestinians.

Jabour said that the colonists have escalated their assaults in the area to illegally confiscate approximately 1000 Dunams of Palestinian lands, owned by several families, including the families of Hreizat, Abu Samra, Rashid, Nawaj’a, Abu Qbeita, and Abu Ali.

He added that the soldiers are complicit with these assaults and violations, as they protect the Israeli assailants, attack and abduct the Palestinians who try to defend themselves and protect their homes and lands.