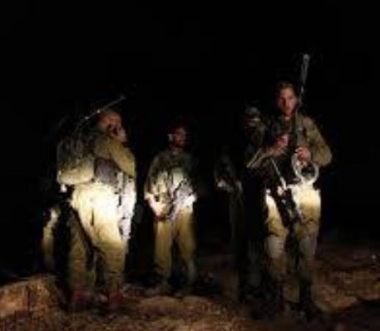 Israeli soldiers abducted, on Tuesday evening, two Palestinian Shepherds in Ein al-Hilwa and as-Sakout areas, in the Northern Plains of the occupied West Bank, for bringing their cattle to a distance of 2 kilometers away from Shidmot illegal colony.

The soldiers attacked the two shepherds and abducted them, before moving them to an unknown destination.

It is worth mentioning that Israel prevents the Palestinians from planting their lands in the Sakout Meadow, allegedly for being close to the border with Jordan.

In addition, the Israeli police imposed a 250 Shekels fine on a farmer in the Sakout Meadow, for driving his tractor in that area.

Furthermore, the soldiers abducted four Palestinians; one of them is a mother of five, including two toddlers, after a group of illegal Israeli colonists invaded Palestinian lands, east of Yatta town, south of the southern West Bank city of Hebron, and assaulted many Palestinians.