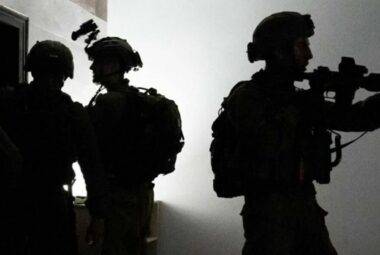 The soldiers also installed many roadblocks on Hebron’s northern roads and the main streets leading to Yatta, Sair, and Halhoul, stopped and searched dozens of cars, and interrogated many Palestinians while inspecting their ID cards.

In Bethlehem, south of occupied Jerusalem, the soldiers invaded the Aida refugee camp north of the city and abducted Osaideddin Ahmad Abu Sha’ira, 20, in addition to Ahmad Mahmoud Taqatqa, 49, who was abducted in Bethlehem city.

In Jenin, in the northern West Bank, a large Israeli military force, including many armored vehicles and at least one bulldozer, invaded the city before the soldiers stormed, ransacked many homes, and abducted five Palestinians, in addition to wounding four, including a child.