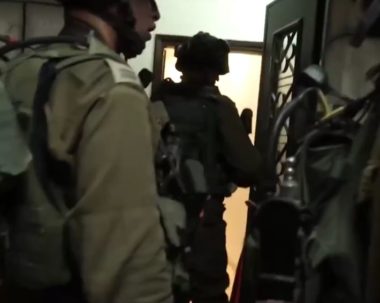 Israeli soldiers abducted, on Monday at dawn, nine Palestinians, including a child, from their homes in several parts of the occupied West Bank.

The soldiers invaded and searched dozens of homes across the West Bank, causing damage, and interrogated many Palestinians while inspecting their ID cards.

The soldiers searched many homes in the governorate, including the home of a former political prisoner, identified as Khairi Skafi.

In addition, the soldiers fired several live rounds, rubber-coated steel bullets and gas bombs, at youngsters protesting the invasion into their neighborhoods, and homes, in Nablus, Jericho and Hebron.

The soldiers also abducted Bara’ Jad, from his home in Barta’a town, which is surrounded and isolated by the illegal Israeli Annexation Wall, southwest of Jenin, in northern West Bank.