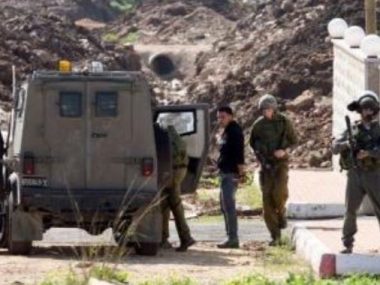 Israeli soldiers abducted, on Sunday at dawn, twelve Palestinians, including one woman, from their homes, in several parts of the occupied West Bank.

Media sources in occupied Jerusalem, said the soldiers invaded and ransacked a home in the at-Tour neighborhood (Mount Of Olives), overlooking the Old City, and abducted a former political prisoner, identified as Jamal Za’tari, before moving him to an interrogation facility.

In addition, the Nablus office of the Palestinian Prisoners’ Society (PPS) said dozens of soldiers invaded Rafidia neighborhood and the Northern Mountain area, in the city, before breaking into many residential buildings, and homes, and violently searched them.

Furthermore, the Bethlehem office of the PPS said many soldiers invaded Hindaza area, east of the city, before searching homes, and abducted Hussein Atef ‘Obeyyat, the son of Atef, who was assassinated by the army in 2002.

In related news, the soldiers invaded and searched many homes in the towns of Yatta, Sammoa’, Halhoul and ath-Thaheriyya, and summoned many Palestinians for interrogation in Etzion military base and security center, north of Hebron.

Some of the Palestinians who were summoned for interrogation, after the soldiers searched their homes, have been identified as Khaled Jibreen Shehada, Mahmoud Rawashda, Abdul-Hakim Daghamin and Ayman al-Battat.

On Saturday evening, the soldiers invaded the al-‘Arqa village, southwest of Jenin, and installed a military roadblock at its main entrance, before stopping and searching dozens of cars, and interrogated many Palestinians while inspecting their ID cards.

Dozens of soldiers were also deployed in mountains surrounding the village and conducted extensive searches.