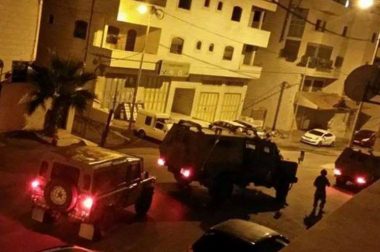 The Palestinian Prisoners’ Society (PPS) has reported that Israeli soldiers invaded several communities in the occupied West Bank, before breaking into and violently searching dozens of homes, and abducted nineteen Palestinians in addition to illegally confiscating cash, a mobile phone and a laptop from one of the homes.

The PPS office in Tulkarem, in northern West Bank, said dozens of soldiers invaded Deir al-Ghosoun town, north of the city, before many soldiers stormed the home of Ameed Badran, 20, abducted him and illegally confiscating a laptop, a mobile phone, and 250 Shekels.

The soldiers also summoned Ameed’s mother for interrogation, and fired live rounds in the air near the property before withdrawing.

It is worth mentioning that the army, and security officers, claimed they found weapons, and confiscated cash, in Deir al-Ghosoun, and in Qotna town, northeast of occupied Jerusalem.

In addition, the soldiers invaded and ransacked the home of Yasser Salim, in Azzoun town, east of the northern West Bank city of Qalqilia, and abducted his son, Aseed, after assaulting him, causing cuts and bruises.

In Ramallah, in central West Bank, the soldiers abducted Sobhi Abu Shousha, from his home in Betunia town, west of the city, and fired live rounds, gas bombs and rubber-coated steel bullets, at protesters who hurled stones at the invading army jeeps.

In addition, several Palestinians suffered the effects of teargas inhalation in Beit Ummar, north of Hebron, during protests against the army’s invasion of the town, the violent searches of homes, and the soldiers’ abduction of nine Palestinians.