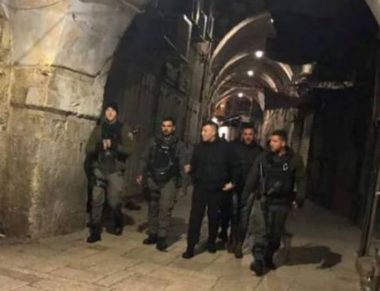 Israeli soldiers abducted, late at night and on Friday at fawn, seven Palestinians, including two children, during massive and violent searches of homes, in the Old City of occupied East Jerusalem.

Media sources said the soldiers abducted Abada Najib, Mahmoud Najib, Wahid al-Bakri, and Fadi Oleyyan, from their homes in the Old City, and took them to an interrogation facility.

In addition, the soldiers abducted Sheikh Noureddin Rajabai, while leaving the Al-Aqsa Mosque.

Opinion: ãWe Will Only be Moved as Bodiesã: Israel and Bedouins Face Off in the Negev