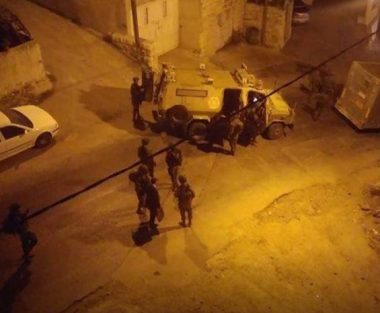 The Palestinian Prisoners’ Society (PPS) has reported that Israel soldiers abducted, overnight until dawn hours Thursday, seventeen Palestinians from their homes in several parts of the occupied West Bank.

The PPS said the soldiers stormed and violently searched many homes, causing damage, and interrogated several Palestinians while inspecting their ID cards.

The soldiers also installed roadblocks, before stopping and searching dozens of cars, and were extensively deployed in many Palestinian communities.

In related news, the soldiers invaded and caused damage to many homes in Qalandia refugee camp, north of Jerusalem, and fired live rounds, rubber-coated steel bullets and gas bombs at local protesters.

In Hebron, in southern West Bank, the soldiers summoned Islam Khatib Tamimi for interrogation, after storming and searching his home, in addition to invading the home of former political prisoner, Zeid Shaker al-Juneidi, and the home of Jamal al-Jabal, before confiscating cash during violent searches.

The Palestinian Prisoners’ Society (PPS) has reported that Israeli soldiers abducted, at dawn Thursday, at least seven Palestinians from their homes in several parts of the occupied West Bank.

In Qalqilia, in northern West Bank, the soldiers abducted Mahmoud Shreim from his home.

In Hebron, in the southern part of the West Bank, the soldiers also invaded and searched homes, and abducted Nadim Bassam Faqqousa, 20, after repeatedly assaulting him, causing cuts and bruises.

In Hebron city, the soldiers invaded the home of Islam Khatib Tamimi, and searched the property, before summoning him for interrogation in Etzion military base and security center, north of the city.