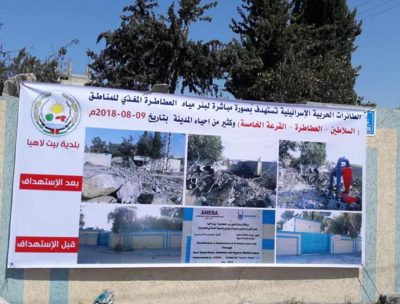 Media sources in Gaza have reported that, among various sites and areas targeted by Israeli missiles in the coastal region, are water wells, and tourist areas.

Yousef Abu Kamil, from the Public Relations department of al-Mughraqa Local Council, said the Israeli missiles destroyed a well owned by the city, and provides water for approximately 11.000 Palestinians.

He added that the Israeli missiles also destroyed two cars of the local council, in addition to other property damage.

Abu Kamil also said that the new building of the local council sustained property damage, in addition a radio transmission tower and a fuel pumping machine.

In addition, Beit Lahia municipality said the army also bombarded its well, providing the residents with water, in addition to causing serious property damage to buildings and property owned by the city.

The Israeli army claims its attacks targeted centers run by the al-Qassam Brigades, the armed wing of Hamas, yet, its missiles have led to civilian casualties, and extensive damage to homes and infrastructure in the besieged coastal region.

The Israel missiles that targeted Gaza in predawn escalation have led to the death of a pregnant Palestinian mother, identified as Enas Mohammad Khammash, 23, and her toddler girl, Bayan, only 18 months of age.

The missiles also killed a third Palestinian, identified as Ali al-Ghandour, 30, in northern Gaza, and led to many injuries.

Also on Wednesday, the army fired several missiles into various areas of the Gaza Strip, including a building in the Sudaniyya area of northern Gaza, which was first struck by three missiles, followed by an additional six missiles, just minutes later.

The Israeli army said it targeted several Hamas centers in Gaza, reportedly when six Israelis were injured in the Sderot settlement, in the Negev, “after eight shells were fired from the coastal region.”

Israeli Ynet News said that one Israeli man, aged 23, was injured by shrapnel in his leg, and added that “two pregnant women in addition to a man, 42 years of age, were treated for shock,” before being moved to Barzilai Hospital.

It alleged that Hamas fighters fired live rounds at “civil engineering equipment,” used as part of a “anti-tunnel barrier’” which is being built along the barrier with Gaza, causing damage, before the army fire a tank shell at a Hamas post.

Hamas said its fighters fired shells into nearby army posts, in retaliation to Israeli bombardment of the coastal region, and added that it has no Interest in escalation.

Hamas leaders said that they are holding talks with Egypt, to restore calm to the region, and to avoid a potentially serious military escalation.

The Israeli army said it raised the alert level along the border with Gaza, after noticing that Hamas fighters were evacuated from their posts along the border, a move that Hamas said was meant to ensure their safety, and avoid further escalation, while the army considered it as part of preparation for potential escalation.