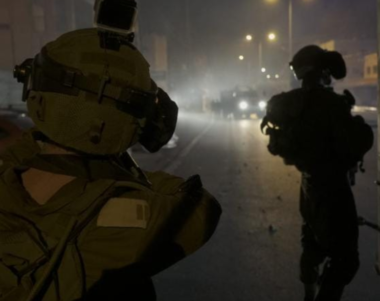 Israeli soldiers abducted, earlier Monday, seven Palestinian, including a child, in several parts of the occupied West Bank, after the soldiers invaded and ransacked many homes and buildings, the Palestinian Prisoners’ Society (PPS) has reported.

It added that the soldiers also searched and ransacked homes in Hebron governorate, in southern West Bank, and abducted Atallah Issa Abu Sbeih, in addition to searching the homes of Mohammad Khaled Shawaheen and Hafeth Rashid and Ali Rashid, in Yatta town, south of Hebron city.

In addition, the soldiers abducted a child, identified as Osama Essam Rajabi, 15, after stopping him at Abu ar-Reese military roadblock, west of the Ibrahimi Mosque in Hebron city, while he was heading to his school.

It is worth mentioning that the soldiers also closed the Ibrahimi Mosque to all Muslim worshipers, to allow groups of illegal colonialist settlers to visit it during the Jewish New Year. The closure is for 24 hours, starting at ten on Sunday night.

Furthermore, the soldiers installed roadblocks in Hebron’s northern roads, and the entrances of Sa’ir Yatta and as-Sammoa’ towns, before stopping and searching dozens of cars, and interrogated many Palestinians while inspecting their ID cards.

In Bethlehem, South of Jerusalem, the soldiers abducted Raghad Raed Shamrookh, 24, and Bassel Waleed Da’amsa, 25, from their homes in Deheishe refugee camp, South of the city.