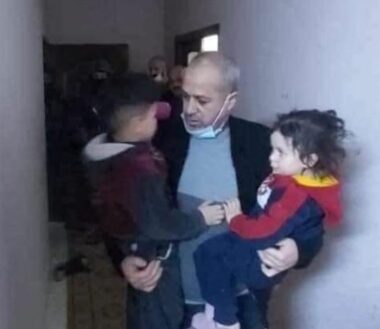 Israeli soldiers invaded, on Monday at dawn, many Palestinian communities across the occupied West Bank, before violently searching them, causing damage, and abducted six Palestinians, including the father of a child who was killed by the army in March of 2019. The soldiers also abducted one Palestinian on Sunday evening.

Several army jeeps invaded Nablus city, in northern West Bank, searched homes and abducted Ala’ Hmeidan, from his home in the al-Ma’ajeen neighborhood.

Many Palestinians protested the invasion and violent searches of homes, and hurled stones at the invading soldiers who fired a few live rounds, rubber-coated steel bullets, and gas bombs.

The soldiers also invaded the home of a former legislator, Yasser Mansour, in Nablus city, and caused damage to its front area, including the main door.

In addition, many army jeeps invaded Zabbouba village, west of the northern West Bank city of Jenin, and searched homes, causing damage. The army used military dogs during the invasions into the properties.

The soldiers frequently invaded Jama’in, and repeatedly break into and search homes in the village, which lost large areas of farmland due to the construction of the illegal Annexation Wall.

In Hebron, in southern West Bank, the soldiers abducted four Palestinians, including two children, after invading their homes and searching them.

Media sources said the soldiers abducted Firas Zakariya al-Qeeq, 24, in addition to Fuad Amjad Hadoush, 17, and Amjad at-Teety, 17, from their homes in the al-‘Arroub refugee camp, north of Hebron.

In Hebron city, the soldiers abducted Lu’ay Gheith, from his home, while preparing to head to the Ibrahimi Mosque, for dawn prayers.

It is worth mentioning that Lu’ay is the father of Abdullah Gheith, 16, who was killed by Israeli soldiers on May 31, 2019, near the West Bank city of Bethlehem, while trying to enter Jerusalem for Friday prayers in the Al-Aqsa Mosque.

The army also installed roadblocks on roads, in the northern part of Hebron city, in addition to the roads leading to Beit Awwa, Sa’ir and Halhoul towns, before stopping and searching dozens of cars, and interrogated many Palestinians while inspecting their ID cards.

In Jericho city, in northeastern West Bank, the soldiers abducted Shaker Jalayta, from his home in Yaffa Street, after storming the property, causing damage.

The soldiers also shot two Palestinian teenage boys, after the army invaded the Shweika neighborhood, to the north of Tulkarem, in the northern part of the occupied West Bank.