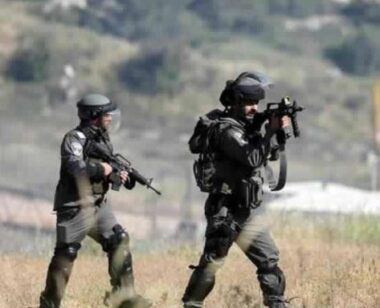 Israeli soldiers shot and injured, on Sunday evening, two Palestinian teenage boys, after the army invaded the Shweika neighborhood, to the north of Tulkarem, in the northern part of the occupied West Bank.

The two wounded Palestinians, 15 and 18 years of age, were shot by live round to the knee and were moved to a governmental hospital in Tulkarem.

Palestinian medics also provided treatment to many Palestinians who suffered the effects of teargas inhalation.

The Palestinians were injured after several army jeeps invaded the area, leading to protests.

It is worth mentioning that the soldiers frequently invade Tulkarem, especially the Shweika area, search and ransack homes, in addition to abducting many Palestinians.