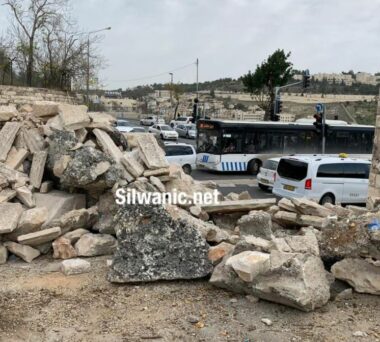 Israeli soldiers and workers of the City Council in the occupied Jerusalem, in the West Bank, invaded Palestinian lands, and bulldozed walls in addition to a staircase leading near the historic al-Yousifiyya Graveyard, northeast of the Al-Aqsa Mosque.

Mustafa Abu Zahra, the head of the Committee for the Preservation of Islamic Cemeteries in Jerusalem, said the soldiers destroyed the structures near the entrance of the al-Yousifiyya graveyard, violating the sanctity and history of the site.

It is worth mentioning that the lands are privately owned by the family of local Palestinian, Hussein Hamad Atallah.

The family posted a sign on the land, affirming their ownership, and asking to be contacted by the authorities.

The Wadi Hilweh Information Center in Silwan (Silwanic) said the soldiers also demolished the wall of the Shuhada cemetery, which is an extension of the al-Yousifiyya Graveyard.

Several Palestinians gathered in the area and tried to stop the destruction of the site, but the soldiers forced them away.

Abu Zahra added that the attack only came about two weeks after the soldiers demolished the staircase and the wall of the historic graveyard.

Israel is trying to remove the historic Islamic cemetery, including the staircase, to establish a path that would lead to the so-called National Garden, on Palestinian lands.

It is worth mentioning that about three weeks ago, the government-run Israeli Land Authority, issued bids for the construction of a new neighborhood, in the segregated, Givat HaMatos Jewish-only colony.