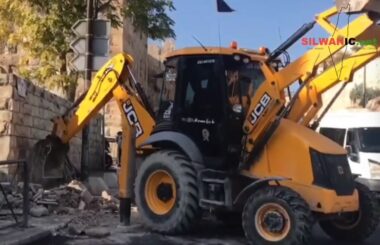 Israeli soldiers demolished, Sunday, a historic staircase leading the Shuhada Graveyard which is also part of the al-Yousifiyya graveyard, northeast of the Al-Aqsa Mosque, in occupied Jerusalem, as part of its cable car project.

The staircase leads to the Al-Aqsa Mosque and the Old City and is also near the al-Yousifiyya historic graveyard.

The WAFA Palestinian News Agency has reported that Israel demolished the staircase to make room for bigger machinery and tools as part of the ongoing work to build a cable car line, to be used by Israelis and tourists.

The City Council in occupied Jerusalem said it intends to construct concrete foundations that would be used for the cable car, which would begin near the Old City, leading to Mount Of Olives, overlooking al-Aqsa Mosque.

Israel recently demolished Palestinian homes and forced many residents to level and destroy their property in the area, under the allegation of being constructed without permits.

Two weeks ago, the government-run Israeli Land Authority, issued bids for the construction of a new neighborhood, in the segregated, Givat HaMatos Jewish-only colony.