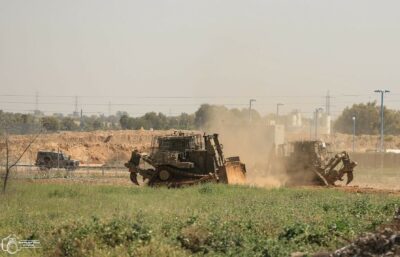 Media sources said the vehicles came from a military base across the perimeter fence, east of the refugee camp, and advanced dozens of meters into the lands, while the soldiers fired sporadic rounds of live ammunition in addition to smoke bombs.

The sources added that the military bulldozers uprooted farmlands near the fence and installed sand hills.

The invasion is the latest of ongoing Israeli violations against the Palestinians in the besieged targeting areas across the perimeter fence in the northern and eastern parts of the Gaza Strip.

Such violations also include attacking Palestinian fishing boats in Gaza territorial waters, leading to dozens of casualties, including fatalities, in addition to property damage and the abduction of many Palestinians.

During these invasions and violations, the farmers are forced out of their lands, and the fishermen are attacked, including with live ammunition, while many have also been abducted and their boats were confiscated.

It is worth mentioning that, under the Oslo Peace Agreement, signed between Israel and the Palestine Liberation Organization in 1993, the fishing zone was set at twenty nautical miles, where the Palestinians are supposed to be able to fish and sail, but Israel keeps violating the agreement, and repeatedly reduces or alters the allotted zone.