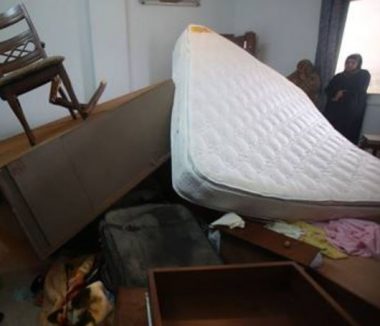 Israeli soldiers invaded on Friday at dawn, the Old City of occupied East Jerusalem, and the areas of Wad al-Jouz and as-Suwwana, in addition to nearby al-Isawiya town, searched and ransacked dozens of homes and abducted at least seventeen Palestinians.

They added that the soldiers also invaded and ransacked homes in Wai al-Jouz, and abducted Mohammad Abu Shousha, in addition to Mustafa al-Hashlamoun, from his home in at-Tour.

In addition, dozens of soldiers invaded and violently searched homes in al-Isawiya town, in the center of Jerusalem, and abducted ten Palestinians after assaulting and clubbing them.

On Thursday at night, many army jeeps invaded al-‘Isawiya, and attempted to invade homes, while many youngsters hurled at least 40 Molotov cocktails at their vehicles, and burnt tires.