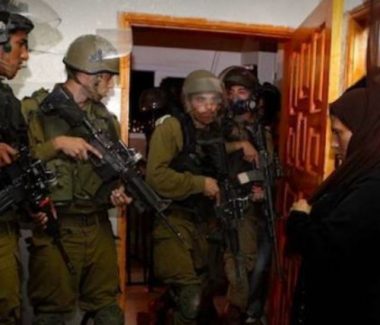 Israeli soldiers abducted, on Sunday at dawn, at least seventeen Palestinians from their homes in several parts of the occupied West Bank, the Palestinian Prisoners’ Society (PPS) has reported.

In Ramallah, in central West Bank, the soldiers abducted Mahmoud Emad Rimawi, 20, from his home in Beit Rima town, northwest of the city, after breaking into his home, and caused many Palestinians to suffer the effects of teargas inhalation, in Nabi Saleh nearby town.

In addition, the soldiers also abducted a young man, identified as ‘Awwad Hamed, from his home in Silwad town, northeast of Ramallah.

In occupied Jerusalem, the soldiers stormed and searched homes and abducted Mohammad Bader and Jawhar Jawhar, from Abu Dis town east of Jerusalem.

Also in Jerusalem, the soldiers abducted a guard of Al-Aqsa Mosque, identified as Mohammad Salhi, after repeatedly assaulting him.

His abduction came after more than 500 Israeli colonialist settlers and soldiers invaded the holy site, while many colonists raised Israeli flags and conducted provocative tours.

It is worth mentioning that the Palestinian Detainees’ Center for Studies has reported that the soldiers abducted 450 in the West Bank and the Gaza Strip, including 90 children and 11 women, in April.