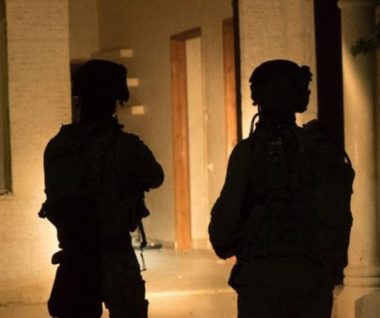 Israeli soldiers abducted, on Monday at dawn, at least seventeen Palestinians from their homes, in several parts of the occupied West Bank, the Palestinian Prisoners’ Society (PPS) has reported.

The PPS said the soldiers invaded and violently searched many homes across the West Bank, and interrogated scores of Palestinians while inspecting their ID cards.

The soldiers also installed many roadblocks in several parts of the West Bank, especially in Ramallah governorate, in central West Bank, and in Hebron, in southern West Bank.

The soldiers stopped and searched dozens of cars, and interrogated scores of Palestinians while inspecting their ID cards.

The soldiers also invaded the family home of a slain teenage girl, identified as Samah Mubarak, 16, in Qaddoura refugee camp, in Ramallah, and violently searched it, in addition to storming the home of Yahia Rabea’, the head of the Students’ Senate at Birzeit University.

It is worth mentioning that Samah, was shot and killed by Israeli soldiers at the Zaim military roadblock, east of occupied Jerusalem, after she refused to remove her face covering.

Samah was left bleeding on the ground and died from her wounds. She was from Nusseirat in Gaza, but her family moved to Umm ash-Sharayet neighborhood in the central West Bank city of Ramallah and was an eleven-grade school student.