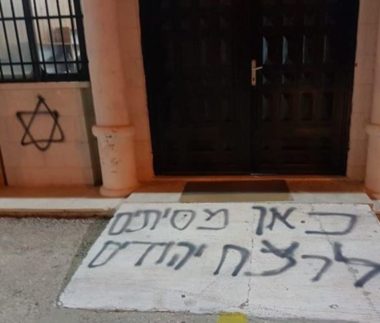 A group of illegal Israeli colonialist settlers infiltrated, on Monday at dawn, into Deir Dibwan village, east of the central West Bank city or Ramallah, and defaced a mosque and several cars parked nearby.

Mansour Mansour, the mayor of Deir Dibwan, said the colonists defaced the walls of the local mosque, and several cars, with racist graffiti.

He added that the illegal colonists have been escalating their crimes against the Palestinians, their homes and lands, and their holy sites, and are encouraged by the inaction of the Israeli occupation forces.

“The protection of holy sites and places of worship isn’t a task that only the Palestinians have to do,” Mansour said, “such crimes require real measures to counter them, by everybody in the Arab and Islamic countries, and the entire world.”