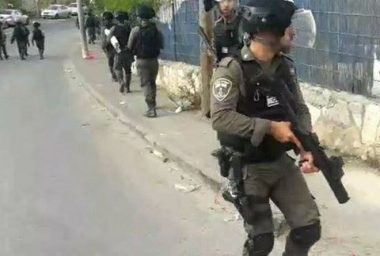 Israeli soldiers invaded, on Wednesday at dawn, dozens of Palestinian homes, in the al-Isawiya town, in the center of occupied East Jerusalem, searched them and abducted at least six Palestinians before moving them to a number of detention and interrogation centers in the city.

The abductions took place after the soldiers invaded the town several times, on Tuesday evening and on Wednesday at dawn, and searched many homes, including the home of lawyer Shireen al-Isawi, 39, before she was released from detention, after spending 43 months behind bars.

The army removed all flags and posters welcoming Shireen, and threatened to repeatedly invade the town, the family’s home and to impose punitive measures, should the celebrations resume.

Shireen was released, on Tuesday evening, just three months shy from her four-year sentence, after the Israeli High Court held a session regarding her case, and the case of her brother, Medhat, who is serving an eight-year imprisonment sentence.

It is worth mentioning that the soldiers invaded the northern West Bank governorate of Tulkarem, and abducted five Palestinians.