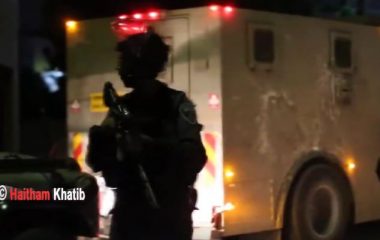 Israeli soldiers invaded, on Wednesday at dawn, six Palestinians, including a father and his son, in the West Bank governorates of Ramallah and Hebron, during extensive military searches of homes.

Several armored Israeli military jeeps invaded Bil’in village, west of the central West Bank city of Ramallah, before the soldiers stormed homes, violently searched them and interrogated many Palestinians prior to abducting three of them.

He added that the soldiers parked their military jeeps in front of his home and prevented him from documenting the ongoing invasion while threatening to shoot him when he approaches them during the invasion.

The soldiers also attacked and injured Amjad Makhamra, 27, before abducting his brother, Ibrahim.

The Palestinians, who were abducted in Hebron, were taken during and extensive Israeli military campaign, targeting dozens of homes and buildings, in several parts of Hebron governorate, in which the soldiers also confiscated a car and a mobile phone.

In addition, dozens of Israeli soldiers conducted extensive and violent searches of homes in the al-‘Isawiya town, in occupied Jerusalem, and abducted eleven Palestinians.