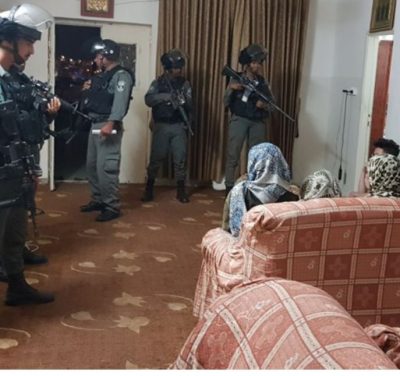 Dozens of Israeli soldiers invaded, on Tuesday at dawn, several areas in the southern West Bank governorate of Hebron, before storming and ransacking many homes, and confiscated a Palestinian car, and a mobile phone.

Media sources said the soldiers invaded the Old City of Hebron, and fired many flares, in addition to firing gas bombs and concussion grenades in the Salaam Street and the Schools Street.

The added that the soldiers also launched a surveillance balloon over several areas of the Old City.

The soldiers invaded and ransacked many homes, including those owned by Arafat Jamjoum and his brother, in Abu Rumman Mountain in Hebron city, and confiscated one car, in addition to invading the homes of Ammar Othman al-’Oweiwi, Rami at-Turk, and human rights activist Islam Khatib Tamimi, before confiscating his mobile phone.

The army also invaded the home of former government minister, Engineer Issa Ja’bari, in addition to the homes of Sa’ad al-Qawasma and Rami al-Juneidi.

Furthermore, the soldiers invaded Kharas and Nuba towns, northwest of Hebron, before storming and violently searching homes, and summoned Palestinians, including Mohammad Ibrahim Saya’ra and Ahmad Zidan al-Kassar, for interrogation in Etzion military base and security center, north of Hebron.

In addition, the army invaded many homes in Sinjer area, in Doura city, southwest of Hebron.