Al-Qassam And Al-Quds Brigades: “Israel Started This Aggression, We Retaliated, And Will Defend Our People” 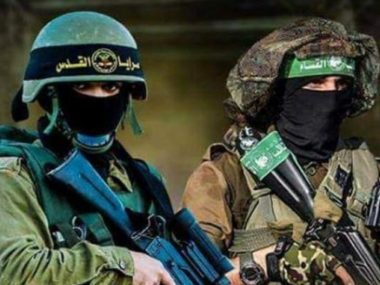 A joint statement by the Al-Qassam Brigades of Hamas and the Al-Quds Brigades of the Islamic Jihad claimed responsibility for firing shells into Israeli targets across the border fence, and said the shelling came in retaliation to Israeli escalation.

The two groups said they retaliated by firing dozens of shells at Israeli targets, and even targeting Israeli war jets while striking Gaza, adding that they want the world to know “the Palestinians will not remain silent while Israel continues to commit crimes against them.”

“Israel started this wave of aggression by striking our sites over the past 48 hours, to divert the international attention from its crimes against unarmed civilians slaughtered and injured in the ongoing Great Return March,” they said, “It committed crimes against our people, against humanity, and is now trying to create another front of military escalation.”

“We as armed resistance factions run our battles with the occupation in a way that only serves the interests of our people, and we know what we can and cannot do,” they added, “But we will never allow the Israeli occupation to dictate new equations by slaughtering our people, and spilling their blood.”

The two factions warned Israel that, should this ongoing escalation, the targeting and killing of civilians, continue, “then all options are open for the resistance, and we will retaliate accordingly.”

It is worth mentioning that dawn hours Wednesday witnessed a cautious calm despite Israeli reports denying an indirect ceasefire deal, first reported at midnight, then at 2 a.m. and a third at 4 a.m.

Israeli leaders hold Hamas and the Islamic Jihad fully responsible for the escalation, although the two groups, and other armed resistance factions have refrained from firing shells or attacking Israeli targets until the military killed on Monday, Mohammad Masoud al-Radea’, 31, a member of the al-Qassam Brigades, when the army fired at least two shells at a site run by the group, in Beit Lahia, in northern Gaza.

His death came just a day after the Israeli army fired several shells into a structure and Palestinian lands, between Rafah and Khan Younis, in the southern part of the Gaza Strip, killing two members of the Al-Quds Brigades, identified as Hussein Samir al-‘Amour, 25, and Abdul-Halim Abdul-Karim an-Naqa, 28.