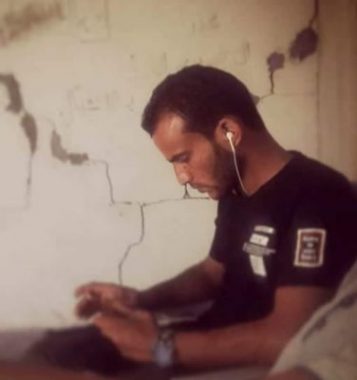 A Palestinian who was critically injured on Sunday, during a predawn Israeli strike on several locations to the south of the Gaza Strip died of his serious wounds, bringing the total number of Palestinians who were killed by Israeli army, today, to three.

Dr. Ashraf al-Qedra, the spokesperson of the Palestinian Health Ministry has confirmed that the Palestinian, Naseem Marwan al-‘Amour, 20, from Rafah, has died from his serious wounds.

He added that the young man suffered very serious wounds, and was rushed to surgery at the European Hospital in Gaza, but later succumbed to his wounds at the Intensive Care Unit.

Israeli forces stationed along the barbed-wire fence that separates between Gaza and Israel fired at least two missiles targeting a location between the cities of Rafah and Khan Younis, killing two Palestinians, identified as Hussein Samir al-‘Amour, 22, and Abdul-Halim Abdul-Karim an-Naqa, 29. The site was completely destroyed.

The Al-Quds Brigades, the armed wing of the Islamic Jihad, said the three are member of the group.

The Israeli army further shelled, with at least two missiles, a location to the east of Deir al-Balah city, in central Gaza, causing heavy damage to the site. No injuries were reported among Palestinians living near the targeted site.

In related news, the soldiers shot, on Sunday evening, three young Palestinian lands, near the fence east of the Zeitoun neighborhood, southeast of Gaza city.

They were rushed to the Shifa Hospital, suffering moderate wounds.