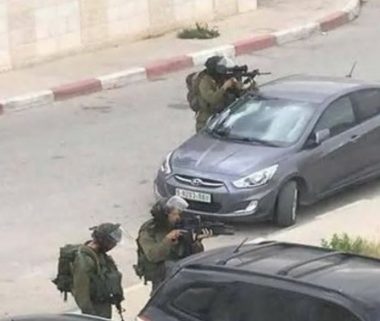 Israeli soldiers invaded, on Monday at dawn, the al-Am’ari refugee camp, south of the central West Bank city of Ramallah, searched and ransacked dozens of homes and abducted at least fifteen Palestinians, in addition to wounding thirteen others.

It is worth mentioning that Aa’ed and Raed are the sons of a political prisoner, who is serving five life sentences in Israeli prisons.

The soldiers stormed and violently searched dozens of homes and buildings during the invasion, causing property damage, in addition to interrogating scores of Palestinians, and using many rooftops as firing posts and monitoring towers.

The Health Ministry in Ramallah said the soldiers mildly injured thirteen Palestinians, when dozens of residents took off to the streets to protest the invasion, and hurled stones at them.

It is worth mentioning that the army surrounded and isolated the refugee camp, before invading it, and deployed a large military forced around it.

Israeli sources said the invasion was carried out by a large military force, adding that the army was looking for the Palestinian who killed an Israeli soldier by dropping a marble flap on him, causing fatal wounds, when the army invaded the refugee camp, Thursday.

They added that the Palestinian protesters also hurled empty bottles and Molotov cocktails at the invading soldiers, without causing casualties, and that the soldiers surrounded a building were the Palestinian, who reportedly killed the soldier, was believed to be hiding.

The soldiers also demolished a building and used several homes as military centers and monitoring towers, before deploying sharpshooters on their rooftops.

In addition, the army fired many live rounds, in addition to gas bombs, concussion grenades and rubber-coated steel bullets, wounding thirteen Palestinians, and prevented medics and ambulances from entering the refugee camp.

The invasion into the refugee camp lasted for several hours, looking for the Palestinians who fatally injured the soldier, identified as Ronen Lubarsky, 20, who died Saturday, just two days after his serious injury.