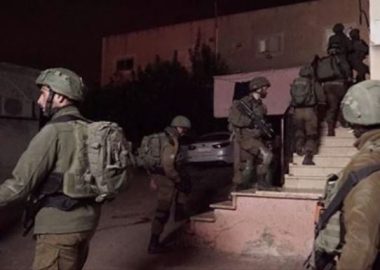 The Palestinian Prisoners’ Society (PPS) said Israeli soldiers conducted, on Sunday at night and Monday at dawn, extensive and violent searched of homes and property in several parts of the occupied West Bank, and abducted 28 Palestinians, including 15 in Ramallah.

In Jerusalem, dozens of soldiers invade the al-‘Isawiya town, in the center of the city, interrogated many Palestinians while searching their homes and abducted Qussai Dari and Yousef Issa Mustafa, and Ata Ezz Dirbas.

The three are known as “Musaharati,” the name given to the person/s who walk and beat drums in residential areas to wake people up so that they can pray and eat sohour which is the meal Muslims eat before the beginning of the fast during the holy Muslim month of Ramadan.

Their abduction came about 24 hours after three other Musaharatis were taken prisoner by the soldiers in the Old City.

In Ramallah, in central West Bank, the soldiers invaded the al-Am’ari refugee camp, south of the city, searched and ransacked dozens of homes and abducted at least fifteen Palestinians, in addition to wounding thirteen others.

It is worth mentioning that Islam Abu Hmeid is the brother of Abdul-Mon’em, who was assassinated by the army in 1994, in addition to Nasser, imprisoned by Israeli and serving seven life terms, Nasr, 5 live terms, Sharif, 4 life-terms, Mohammad Two life-terms, and Jihad who is still awaiting trial.

Israeli sources said the invasion into the refugee camp was carried out by a large military force, adding that the army was looking for the Palestinian who killed an Israeli soldier, identified as Ronen Lubarsky, 20, by dropping a marble flap on him, causing fatal wounds, when the army invaded the refugee camp, Thursday.

Furthermore, the soldiers invaded Beit Sahour town, east of the West Bank city of Bethlehem, searched homes and abducted Husam Mohammad Abu Dayya, 40, in addition to Saleh al-Hreimi, a former political prisoner who was held by Israeli for eighteen years.

In Hebron, in northern West Bank, the soldiers installed a military roadblock at Beit ‘Einoun Junction, and abducted one Palestinian from Sa’ir town, north of the city, identified as Wajdi Nayef Jaradat.

It is worth mentioning that an Israeli court remanded a wounded Palestinian woman, identified as Khawla Sbeih, 43, until June 6th.

Mofeed al-Haj, a lawyer with the Palestinian Prisoners’ Society (PPS) said the woman is currently at Shaare Zedek Israeli Medical Center after the soldiers shot her, on Sunday at night, in Shu’fat neighborhood, in Jerusalem.

The army said the soldiers shot the woman in her legs when she failed to heed to their command, after ordering her to stop.