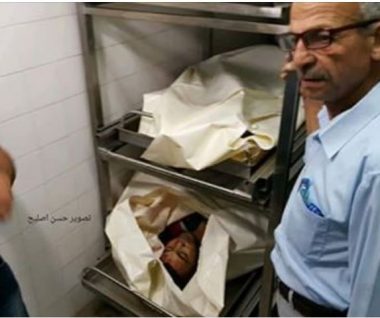 Israeli soldiers fired, on Sunday morning, several shells into a structure and Palestinian lands, between Rafah and Khan Younis, in the southern part of the Gaza Strip, killing two Palestinians and seriously wounding one.

It is worth mentioning that the Israeli army claimed it struck a “Hamas observation post near Khan Younis,” killing two Palestinians.

Meanwhile, the Al-Quds Brigades, the armed wing of the Islamic Jihad, issued an official statement saying the two slain Palestinians were members of the group.

In addition, the Israeli Air Force fired six missiles into two sites, west of Rafah and west of Khan Younis, turning them into rubble.

Israeli daily Haaretz quoted a statement issued by the army, confirming the bombing in Gaza, and saying that the bombardment came “in retaliation for an explosive charge, which was placed near the border fence, and detonated while the army was dismantling it.”

It added that the army did not report any casualties and that the explosive was placed near the border fence in the southern part of the Gaza Strip, “in order to harm soldiers operating in the area.”

The Israeli army stated that, “Hamas continues its daily attempts to damage security infrastructure, threatening both soldiers and civilians,” and held Hamas solely and fully responsible for all incidents in the Gaza Strip.

The army spokesperson added that Hamas will “face the consequences of all activities stemming from the Gaza Strip, targeting Israel and its sovereignty.”

On Saturday, the Israeli army said four Palestinians breached the “security fence” in southern Gaza, and “lit a Molotov cocktail,” and added that the soldiers fired live rounds. The military also said that some Palestinians burnt tires, but later recanted the allegation.