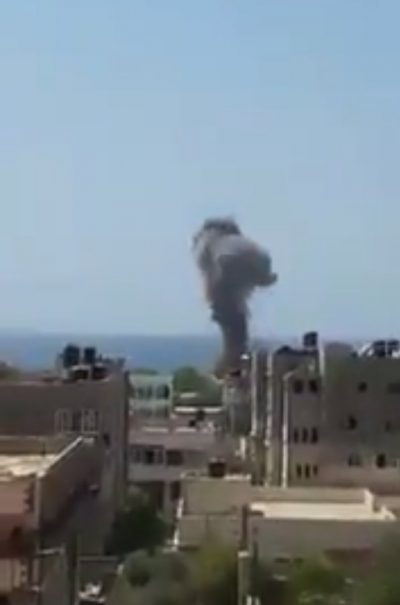 At around 1 am on Tuesday morning, the Israeli airforce began dropping bombs in different parts of the Gaza Strip, claiming that they were targeting ‘Hamas locations’. The bombs did not cause any injuries, but did damage a number of structures.

By Tuesday afternoon, the airstrikes totaled 25, in all areas of Gaza.

The Tuesday airstrikes followed artillery shelling by Israeli forces on Sunday that resulted in the deaths of three Palestinians. The armed wing of the Islamic Jihad party in Gaza responded to these fatal attacks with the firing of two dozen homemade shells across the border toward Israel, causing no injuries and very minor damage to two structures.

In one of the airstrikes by the Israeli airforce, an Israeli military spokesperson claims that the bomb struck a tunnel that reached under the border between Gaza and Israel. If such a tunnel did exist, it was used by Palestinian workers to enter Israel for employment, not for attacks, since there have been no attacks by Palestinians from Gaza inside Israel for over a year.

Israeli leaders hold Hamas and the Islamic Jihad fully responsible for the escalation, although the two groups, and other armed resistance factions have refrained from firing shells or attacking Israeli targets until the military killed on Monday, Mohammad Masoud al-Radea’, 31, a member of the al-Qassam Brigades, the armed wing of Hamas, when the army fired at least two shells at a site run by the group, in Beit Lahia town, in northern Gaza.

His death came just a day after the Israeli army fired several shells into a structure and Palestinian lands, between Rafah and Khan Younis, in the southern part of the Gaza Strip, killing two members of the Al-Quds Brigades, the armed wing of the Islamic Jihad, identified as Hussein Samir al-‘Amour, 25, and Abdul-Halim Abdul-Karim an-Naqa, 28. Over the past two months, Israeli forces have killed more than 120 Palestinians, and wounded more than 13,000, many with live ammunition. The vast majority of those killed and injured were unarmed demonstrators gathered at the border between Gaza and Israel to demand their internationally-recognized right of return to their homes in what is now Israel.