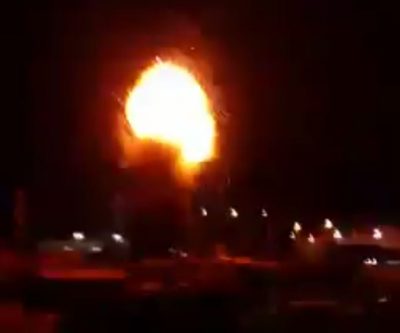 The Israeli army continued, on Wednesday at dawn, the firing of missiles, targeting several areas of the besieged Gaza Strip, in what Israel called “retaliation to shells fired from Gaza into Israeli communities, across the border fence.”

The Israeli Air Force fired at least three missiles into a site, run by an armed resistance group, west of Khan Younis, in the southern part of the Gaza Strip.

The Air Force also fired missiles into the port, east of Khan Younis, and a site in the eastern part of Sheja’eyya neighborhood, east Gaza city.

Furthermore, Israeli military drones fired three missiles into the “Civil Administration Center,” and two missiles into another site, run by the al-Qassam Brigades, the armed wing of Hamas.

Israel said several shells were fired from Gaza into communities in the Negev, Sha’ar HaNegev and Netivot, striking a number of buildings, including a shell reportedly landing in the yard of a kindergarten.

According to the Palestinian Maan News Agency, an Israeli media analyst of Maariv said both Israel and Hamas are interested in a truce, but ” wants a truce before Israel retaliates, and Israel wants a truce after it retaliates.”

The Health Ministry in Gaza called on the Palestinians to remain alert, and to avoid entering areas targeted by the army.

The Israeli army said all the targeted sites in Gaza are “run by Hamas,” including tunnels, and various structures, and alleged that Hamas fired more than 80 shells.

On his part, Khalil al-Hayya, a political leader of Hamas said the movement, and all armed resistance groups, are committed to ceasefire, as long as Israel is committed to it.

Israeli leaders hold Hamas and the Islamic Jihad fully responsible for the escalation, although the two groups, and other armed resistance factions have refrained from firing shells or attacking Israeli targets until the military killed on Monday, Mohammad Masoud al-Radea’, 31, a member of the al-Qassam Brigades, the armed wing of Hamas, when the army fired at least two shells at a site run by the group, in Beit Lahia town, in northern Gaza.

His death came just a day after the Israeli army fired several shells into a structure and Palestinian lands, between Rafah and Khan Younis, in the southern part of the Gaza Strip, killing two members of the Al-Quds Brigades, the armed wing of the Islamic Jihad, identified as Hussein Samir al-‘Amour, 25, and Abdul-Halim Abdul-Karim an-Naqa, 28.